The Power and Glory of God Music Concert

Listen to the Audio

he Power and Glory of God was certainly present at the Forest Lake Church on October 12, 2013. Music, being the vehicle of the evening, transported audience members and performers alike into heavenly realms. Choir, brass, strings, woodwinds, percussion, piano, and organ all came together in thunderous melody and harmony. Summed up in the programs first reading, "Great music was conceived in the heart of God and He has bequeathed this sublime blessing to us to help us express the inexpressible about our creator and our redeemer."

The evening program was structured into the three thematic sections, the first being The Glory of God and headlined with John Rutter's "Gloria." Singing the third movement, the choir, brass and organ delighted the audience with an energetic rendition of the piece under the direction of Mark Becker.

Mr. Becker then directed Forest Lake Academy's vocal group Cantabilé, along with Linda van Niekerk on organ, in a rendition of the piece "Glorious Everlasting."

Next up was the Men of Markham Woods under the direction of Russ Durham, performing an arrangement of "Praise Ye The Lord" by Saint-Saens, for men’s chorus.

This was followed by an original arrangement by Penelope Babienko of three hymns for brass, piano, and organ performed by Advent Brass, with Sabdiasep Rosado on piano and Linda van Niekerk on organ.

Finally, the first section of the program was capped by a magnificent organ solo performance by Linda van Niekerk, playing "Fantasy on Picardy" (Let All Mortal Flesh Keep Silent) by Denis Bédard. 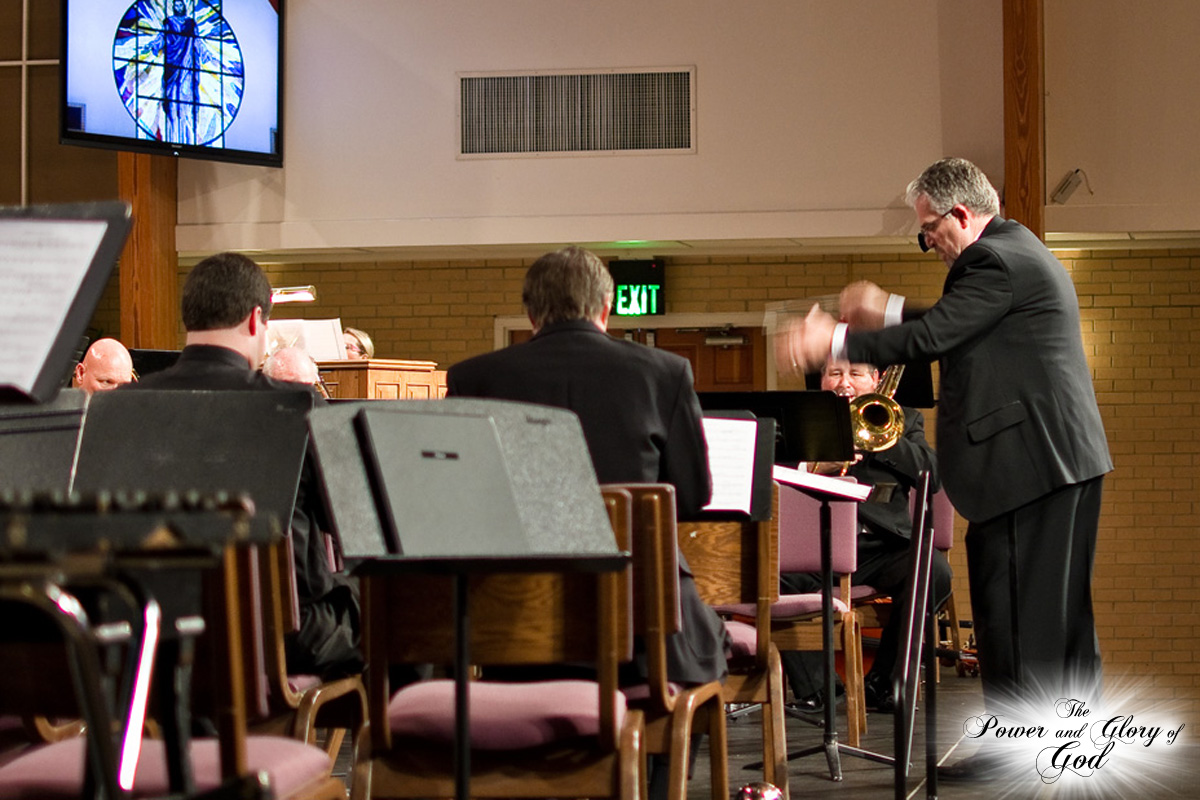 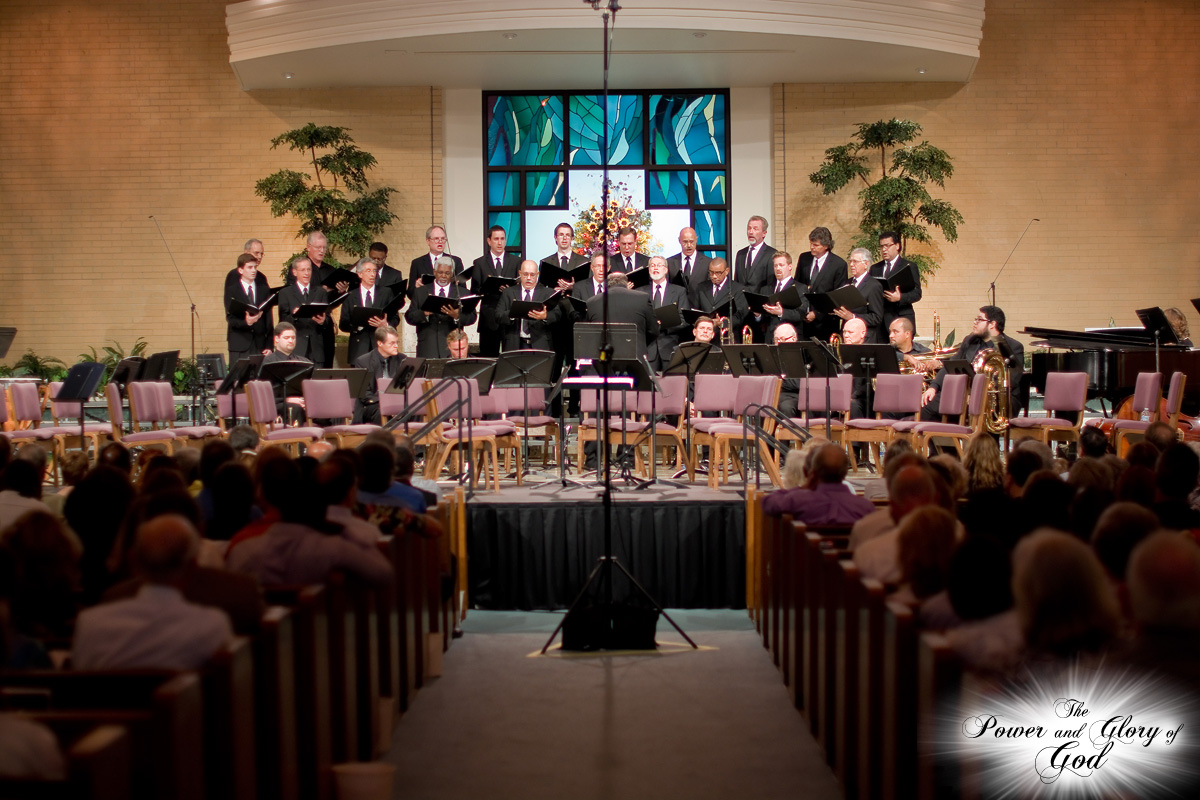 The second section of the program, The Majesty of God, then began. Under the baton of Leon Hauck, the audience was treated to the hauntingly beautiful, stirring, and inspiring anthem "The Majesty and Glory of Your Name." This arrangement was fully orchestrated and was the first piece of the program to involve all the performers at one time. Building to the climax of the piece, choir melody blended with instrumental harmony and mixed together to give a massive and wide open view of the majesty of God.

From the powerful to the sublime, Albinoni's "Adagio in G Minor" followed. Featuring strings and organ, the contemplative tune captured the soulful, reverent nature of God in music.

This was followed by Restoration, a vocal octet. Premiering an original work by Aric Vyhmeister, the group continued the reverent feel of the Albinoni and then wove a musical fabric of changing color, ending with a joyous declaration to the God of creation. 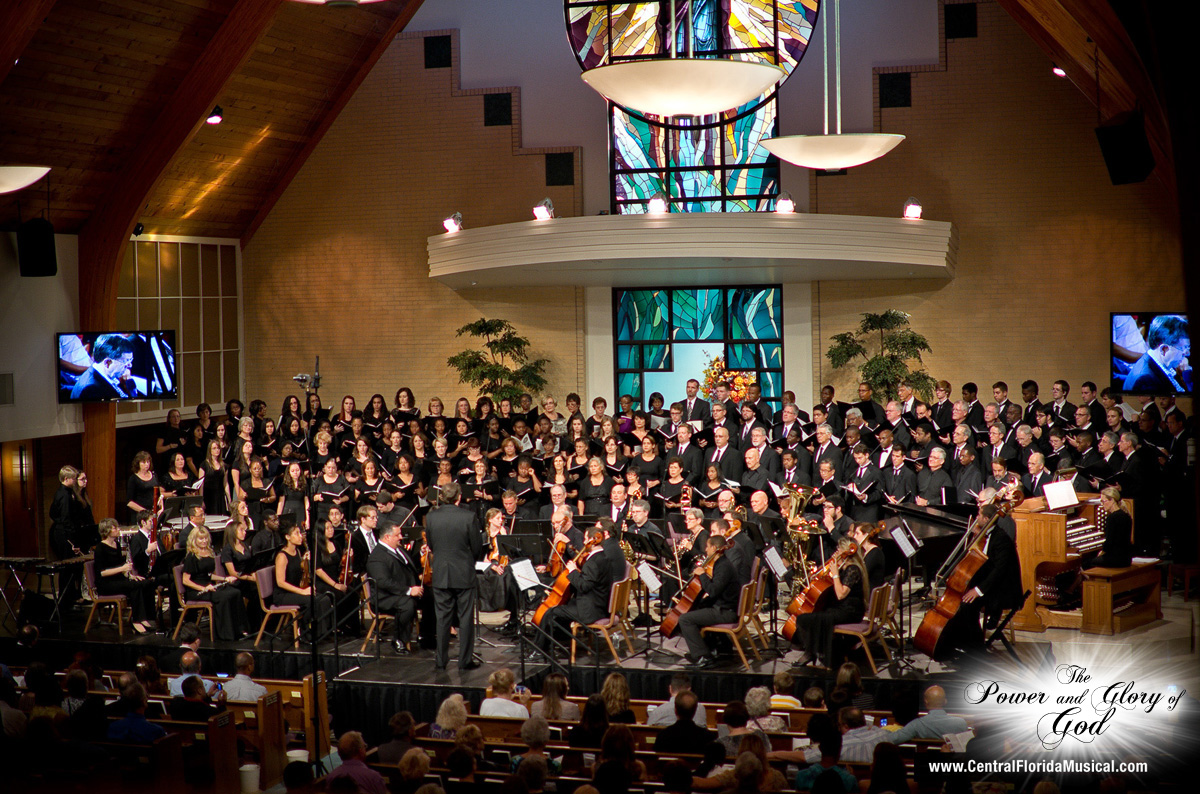 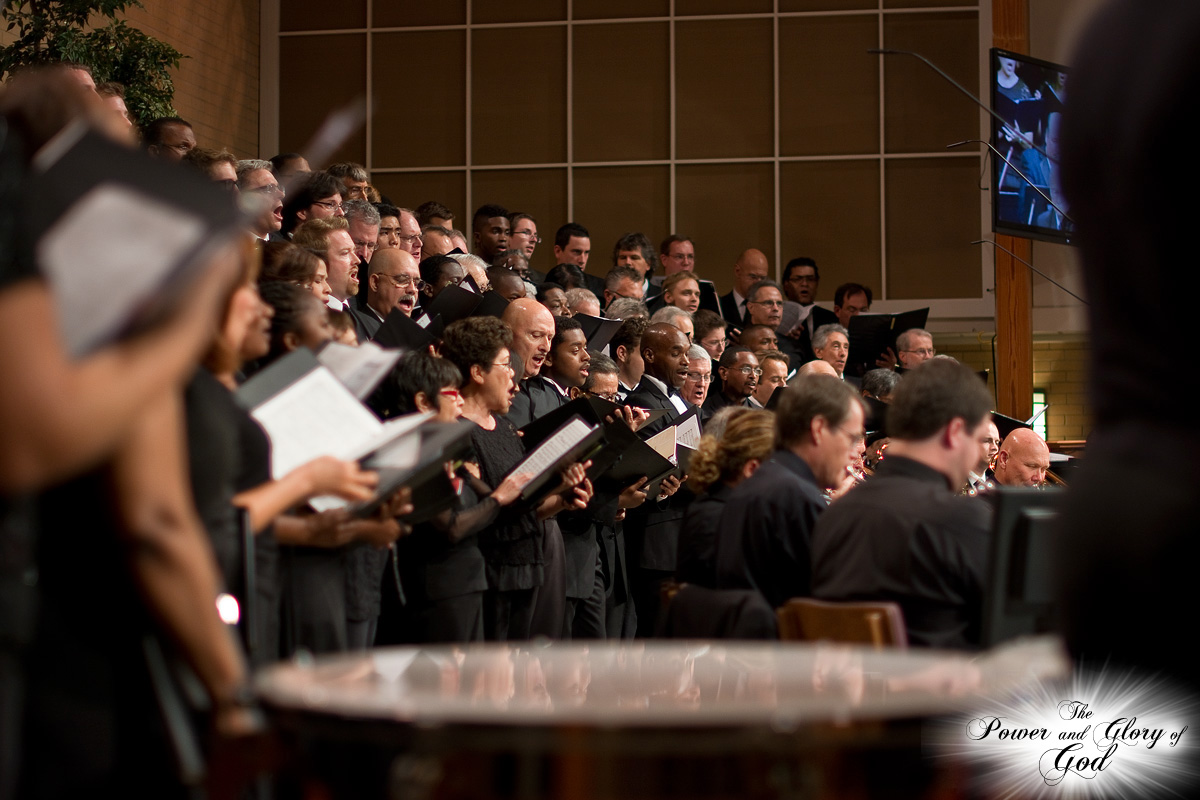 The programs third section—Honor and Praise to God—and penultimate piece was performed by the Forest Lake Church choir under the direction of Dr. Evan Chesney. The choir performed "Eternal Life," a song based on John 3:16.

For the last piece of the evening, all the performers returned for the grand finale. The "Hallelujah Chorus," though written several hundred years ago, has lost none of its punch. The night of October 12 was no different. With an immense sound and heavenly energy, the full 121-voice choir and 41-piece orchestra came together in thunderous hallelujahs to end a night of glorious music, showcasing The Power and Glory of God.

Experience the Power and Glory of God.  Watch to the full concert! 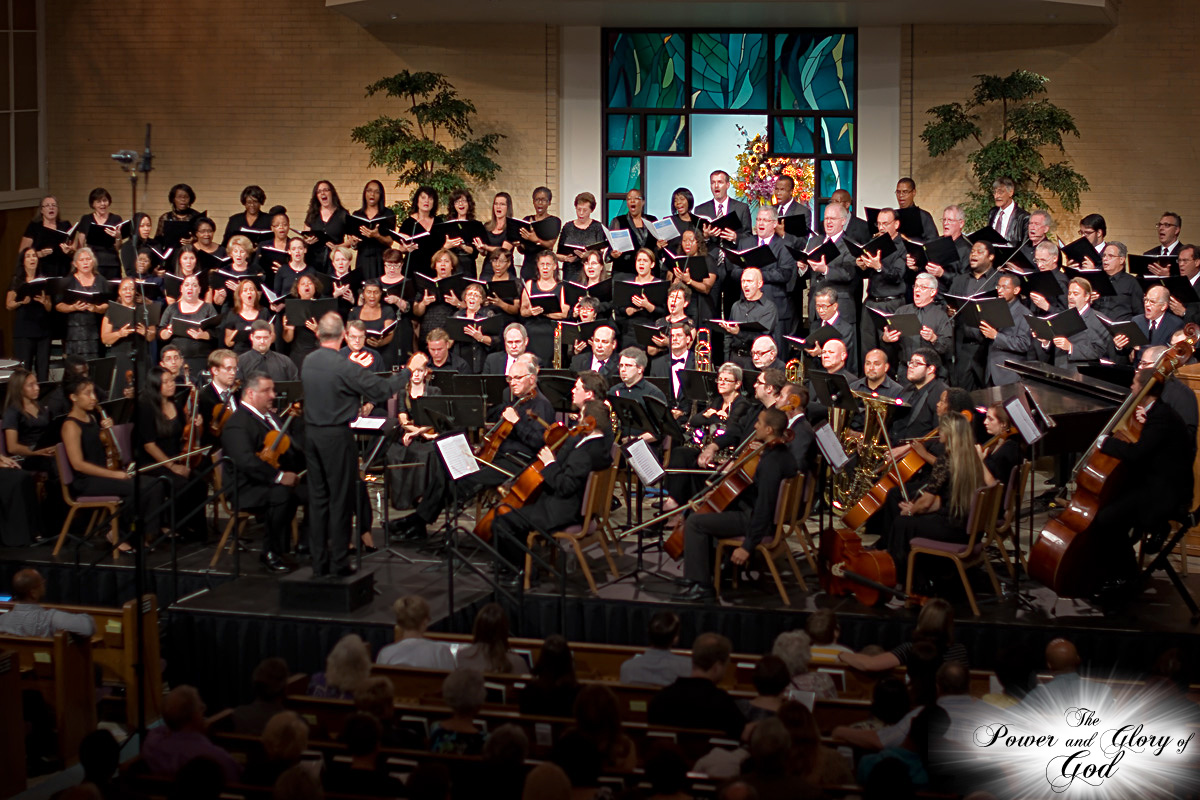 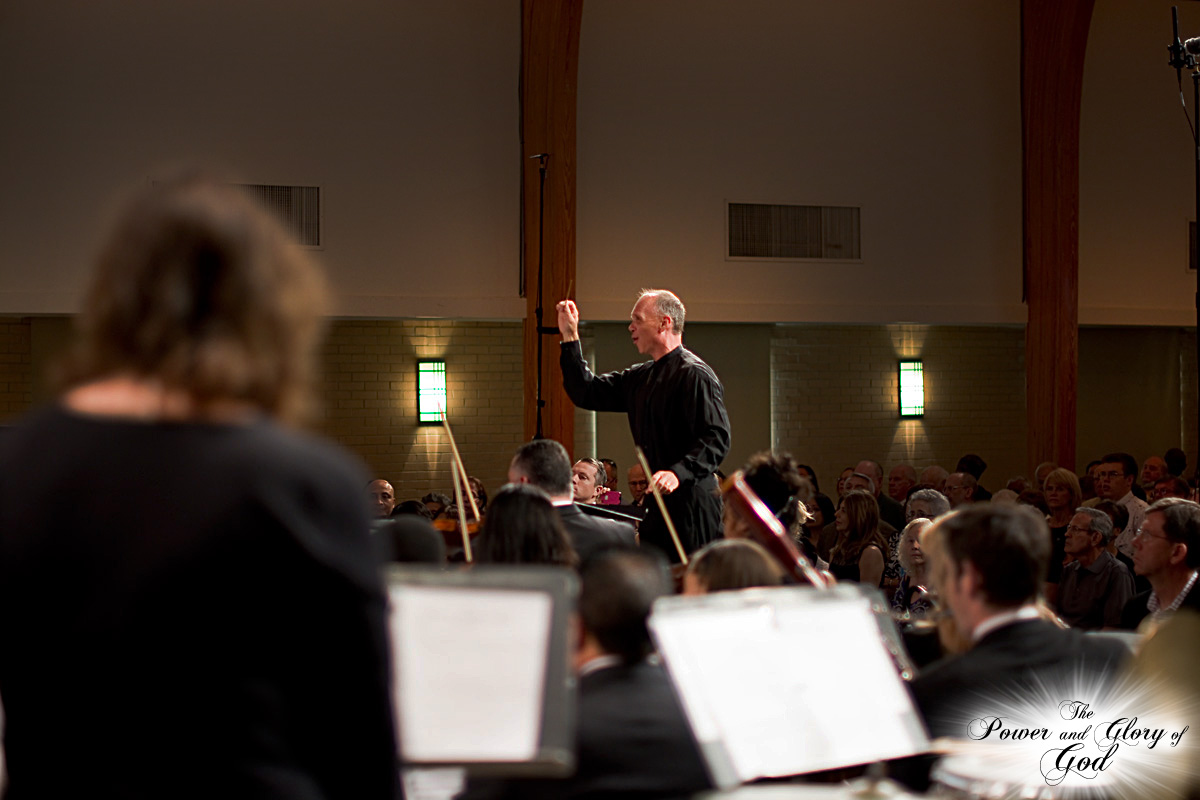 Leon Hauck brings with him 40 years of music performance and directing. He was the choir director at the Denver First Seventh-day Adventist Church and is currently the director of Advent Brass and Restoration, a vocal octet. He studied piano under Virginia Gene Rittenhouse for several years, and at the age of 17 placed 1st in the New England Piano Teachers Association competition. He is an active trombone player, having performed with numerous university groups, as well as an active singer with Restoration. In the tradition of G.P.Telemann, Russ can play almost any wind instrument with a high degree of excellence. Russ has taught music in many schools. He directs several bands, ensembles, and choirs at FLEC. He has inspired many students with his enthusiasm for music, and his unique teaching and motivational methods, helping them to reach heights of success playing their instrument. Evan Chesney is the Minister of Music at the Forest Lake Seventh-day Adventist Church in Florida, a position he has held since 1994. In 1989, he enrolled at the Eastman School of Music, studying voice with Seth McCoy and conducting with Don Neun. After completing an M.Mus. at ESM in 1990, he continued study at Michigan State University, where he studied voice with Claritha Buggs and conducting with Charles Smith. While there, he accepted the minister of music position at Forest Lake. He completed a DMA at MSU in 1998.
Back to Top

(In order of program appearance) Victor Luis Rivera began his study of violin under the tutelage of Deborah Dansby Wells, continuing his studies  until graduating Deltona High School. In 1992, Victor became Concertmaster of "Ars de Chiesa Orchestra" and Concertmaster of the Stetson Youth Chamber Orchestra under the guidance of Routa Kroumovitch at Stetson University.  In 1995, he participated in Volusia County's "All-County" orchestra as the Concert Master and won the Florida Future Music Educators Soloist Competition. He also began to study violin privately with Dr. Alvaro Gomez and received a scholarship to study at Stetson University. While attending Rollins, he was the Student Conductor for the Rollins Orchestra, String Ensemble, and Concert Choir under the supervision of Dr. John V. Sinclair.  Mr. Rivera has performed with many organizations in the Central Florida area, such as the Bach Festival Orchestra, Daytona Beach Community Orchestra, and is the Concert Master of Sabbath Strings. Currently Victor Luis Rivera is pursuing his Masters of Arts and Teaching Degree in Music at Rollins College.  Additionally Victor teaches violin and viola at his private studio. Cantabilé is the select performing and touring choir representing Forest Lake Academy in our community, the state of Florida, and beyond. Composed of freshmen, sophomores, juniors, and seniors, this diverse ensemble ministers to audiences through a wide variety of musical genres and styles. Known for musical excellence, Cantabilé has been featured as guest choir for Florida Hospital and other community organizations and has held the distinguished position of Honor Choir for Disney's Candlelight Processional and Massed Choir Program for a number of years.

The Men of Markham Woods The “Men of Markham Woods” (MMW) is a Men’s Chorus of 27 men primarily from the Markham Woods SDA Church in Longwood, FL. The chorus has functioned in some capacity for over 20 years and was originally conceived and directed by Garland Peterson. In the past three years the MMW has grown from about 14 members to as many as 30 and flourished under the music leadership of Arnold Grace. In August of 2013, Russ Durham accepted music leadership for the group. Though the primary mission of the MMW has been to enhance the worship experience at the Markham Woods SDA Church, the group has frequently sung in several Adventist Churches in the Central Florida Area as well as providing music for special events at Florida Hospital in Orlando, FL. Our passion is ministry thru the medium of Men’s Chorus music. Advent Brass began as a brass quintet in 2004 at the Markham Woods Seventh-day Adventist Church in Longwood, Florida. The current configuration is three cornets, four trombones, one euphonium, and one tuba. The group performs music from a variety of styles, and is blessed in having group members who make custom music arrangements. The players come from a wide variety of backgrounds professionally and musically. They are an all-volunteer group that give of their time and talents because they enjoy music, the camaraderie of like-minded friends, and giving praise to God. Given all these variables, their mission has remained constant: to provide music for the glory of God and for the inspiration of those who listen. Advent Brass performs in church worship services and concerts throughout central Florida. Linda van Niekerk-Franklin, an organist, pianist, violinist, and harpist, is enjoying a career as a performer, teacher, and church musician. She has taught music at all levels and maintained a private studio for more than 40 years. Linda started work on a doctorate in music theory at Michigan State University in 1973 and finished classwork for the degree in 1975. She then moved to Grand Rapids, Michigan, where she maintained a piano studio with about 50 students, taught theory classes in the community college, and continued to assist as associate in organ instruction at Andrews University. Since 1990 she has been organist at First United Methodist Church in Orlando. During her time there the organ, an Aeolian-Skinner, and a Steinway grand piano were renovated in 2010 and 2011, respectively, and rededicated with concerts by her. She has served as church organist in Adventist churches wherever she has lived and has been organist at the Kress Memorial Seventh-day Adventist Church in nearby Winter Park for several years. The word restoration means to put back to original or like-new condition. The singing group Restoration exists to point listeners to Jesus where by beholding Him they might either begin or continue their journey in this life, of experiencing the peace and joy that only He can offer; or in a word, Restoration. But the word is also future directed. Much of the music of Restoration points forward to the second coming of Christ where His followers will be changed and experience the ultimate Restoration, "in the twinkling of an eye". Restoration began in 2006 with four singers and has since grown to it's current size of eight singers and an accompanist.  They sing primarily in churches in the greater Orlando area either during the regular time of worship or doing entire concerts.  They have sung regularly for twice yearly memorial services hosted by Hospice of the Comforter for families that have lost loved ones in their care.  Recently they have sung for the 2013 retreat for retirees at Pine Lake Retreat in Groveland, Florida, and for the 2013 Camp Meeting gathering at Camp Kulaqua in High Springs, Florida. In 2011 and 2013 they sang for the annual ASI (Adventist-layman's Services & Industries) convention at the Rosen Shingle Creek Convention Center in Orlando, Florida. The Forest Lake Church Sanctuary Choir, under the direction of Dr. Evan Chesney–Minister for Music, enhances the Third Service worship throughout the Fall, Winter and Spring of each year. They also sing for special Festival Sabbath services. The choir is open to all who wish to participate.

The musicians of the October 12 program range from academy age to seasoned professionals. Some have traveled from long distances just for this program and others are from right here in Orlando. We are very thankful for each and every one of them for giving of their time and talents, that we might receive a musical blessing.